1921 - Chicago:   Building by Building, Janitor by Janitor, a Union is Born

When the Building Service Employees Union (BSEIU) was first formed in Chicago, it was far ahead of its time. Unlike most unions of its day, BSEIU was integrated. In fact, Black, immigrant and women members already held leadership roles. As William Quesse, the union’s first president and son of German immigrants said, “We are composed of all creeds, colors and nationalities, and do not allow anyone to use prejudice in the organization against each other.” 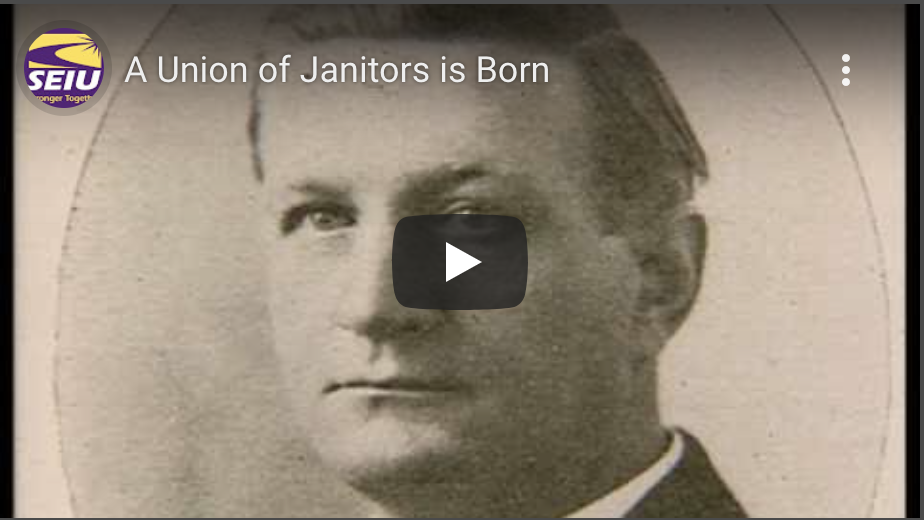 Based in San Francisco, SEIU Local 87 is one of the first SEIU locals founded on the West Coast. At its inception in 1926, the local was called “Janitor’s Officer Building”. As a way to advance worker rights and to curb widespread discrimination against immigrants, women, Black, Asian, and brown union members, the local created a Hiring Hall as a way for cleaners to secure good-paying employment for its diverse membership. Local 87 is the only SEIU janitorial local in the United States that actively uses a hiring hall today.

Mid to late 1940s strike with Local 399 Janitors at the Picadilly Apartments. 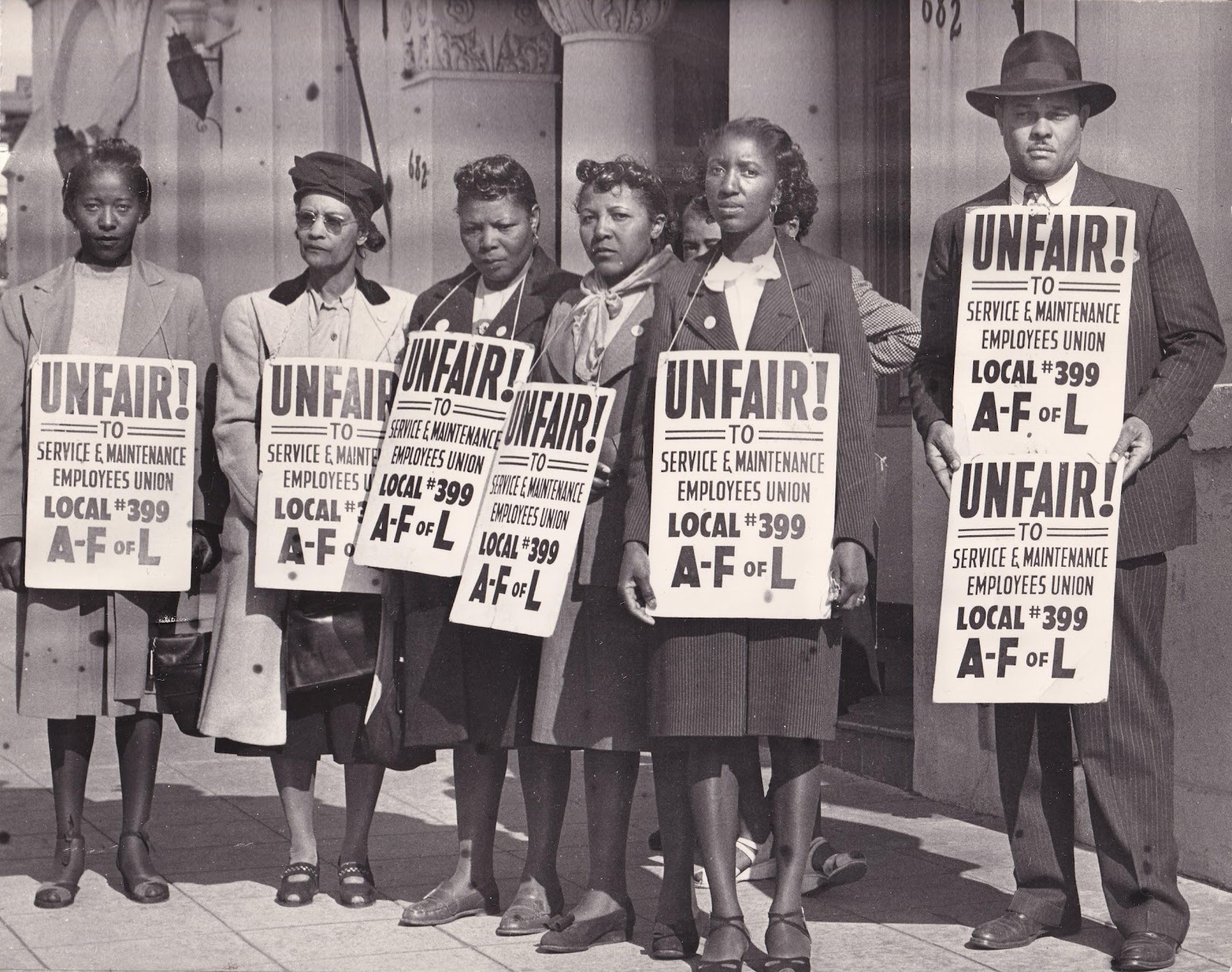 In May of 1945, 130 female janitors who cleaned the Empire State Building walked out in protest, calling for a 5-cent pay increase. The successful action was soon called off and management of the Empire State Building and the Union Local 32-J reached a new contract. The union agreement included the WIN of 5-cents per hour raises for the cleaners, bringing the total hourly wage to 60 cents per hour. 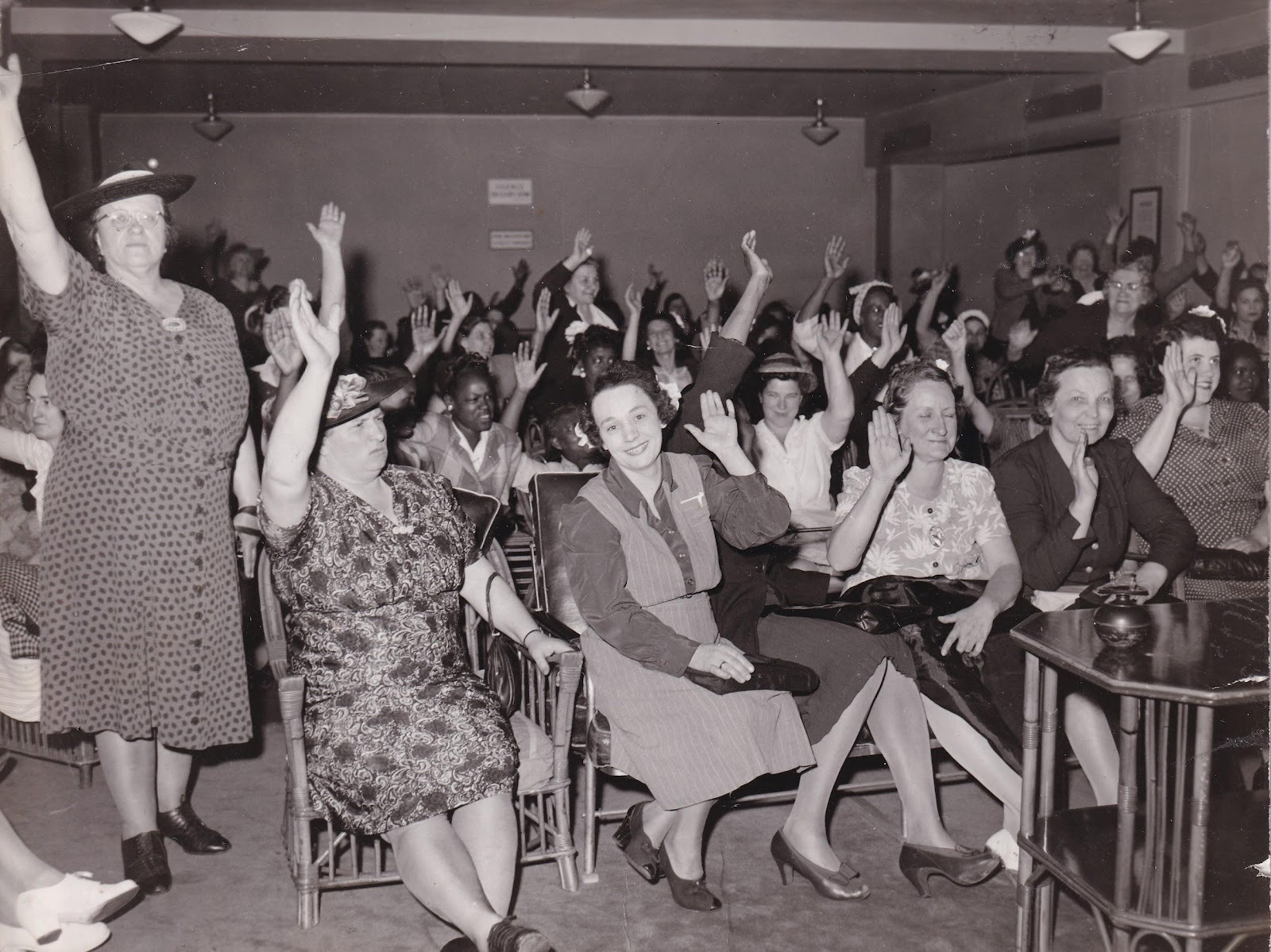 In the 1950s, janitors in Milwaukee went on strike for higher wages. Through their actions, they were able to win raises of 15c per hour. 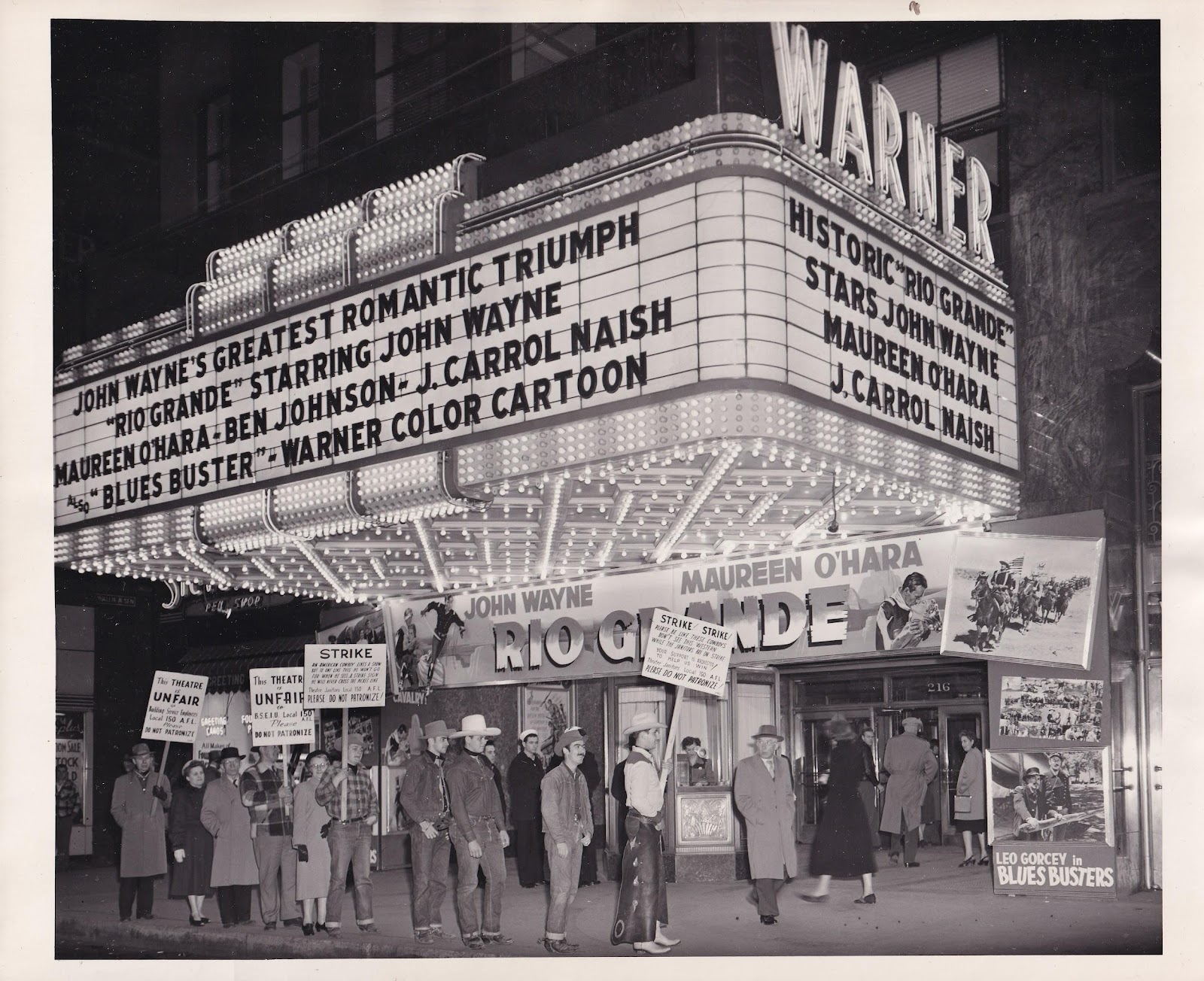 In 1985, Pittsburgh building owners tried to cut janitors’ wages from $7.50 per hour to just $4.50. When the cleaners rejected this pay cut, the owners locked 600 janitors out of their jobs. For almost 2 years, cleaners picketed, including in the bitter cold, outlasting management, and won! This victory kick-started the movement we now call #JusticeForJanitors. We honor those cleaners in Pittsburgh as we continue the fight for fair pay, safe working conditions, and respect for all janitors and custodians! 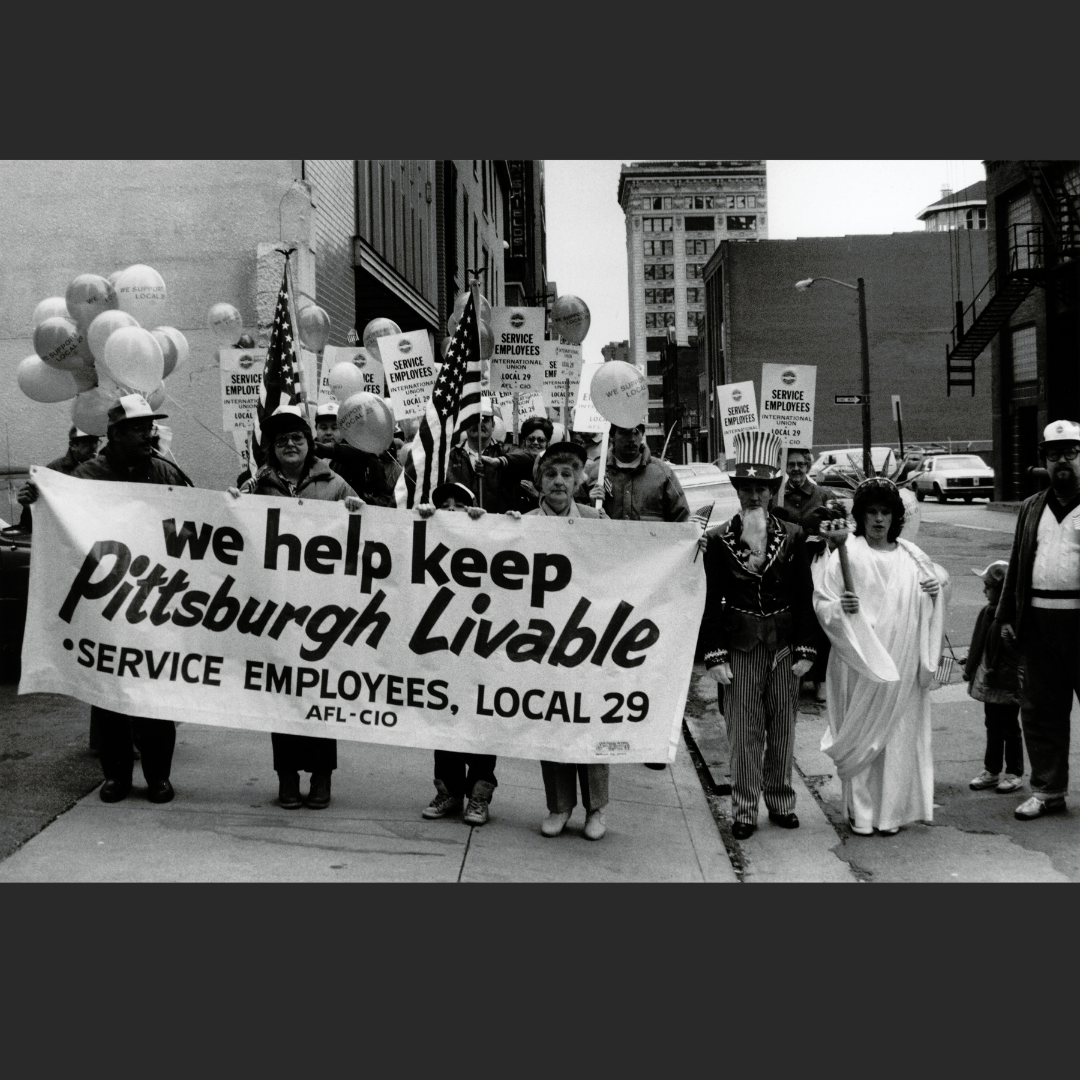 1986 - Denver:  Cleaners Strike and Spark the Justice For Janitors Movement

Throughout the 1980s, in an effort to cut costs, commercial real estate owners contracted out cleaning services to janitorial companies who were in high competition with each other. These companies passed these cuts down by slashing janitor’s wages. Denver cleaners had enough. Together with supporters, they took over the streets demanding fair pay and respect and lit a movement that would spread to Los Angeles and beyond. Today, there are over 150,000 union janitors across North America. 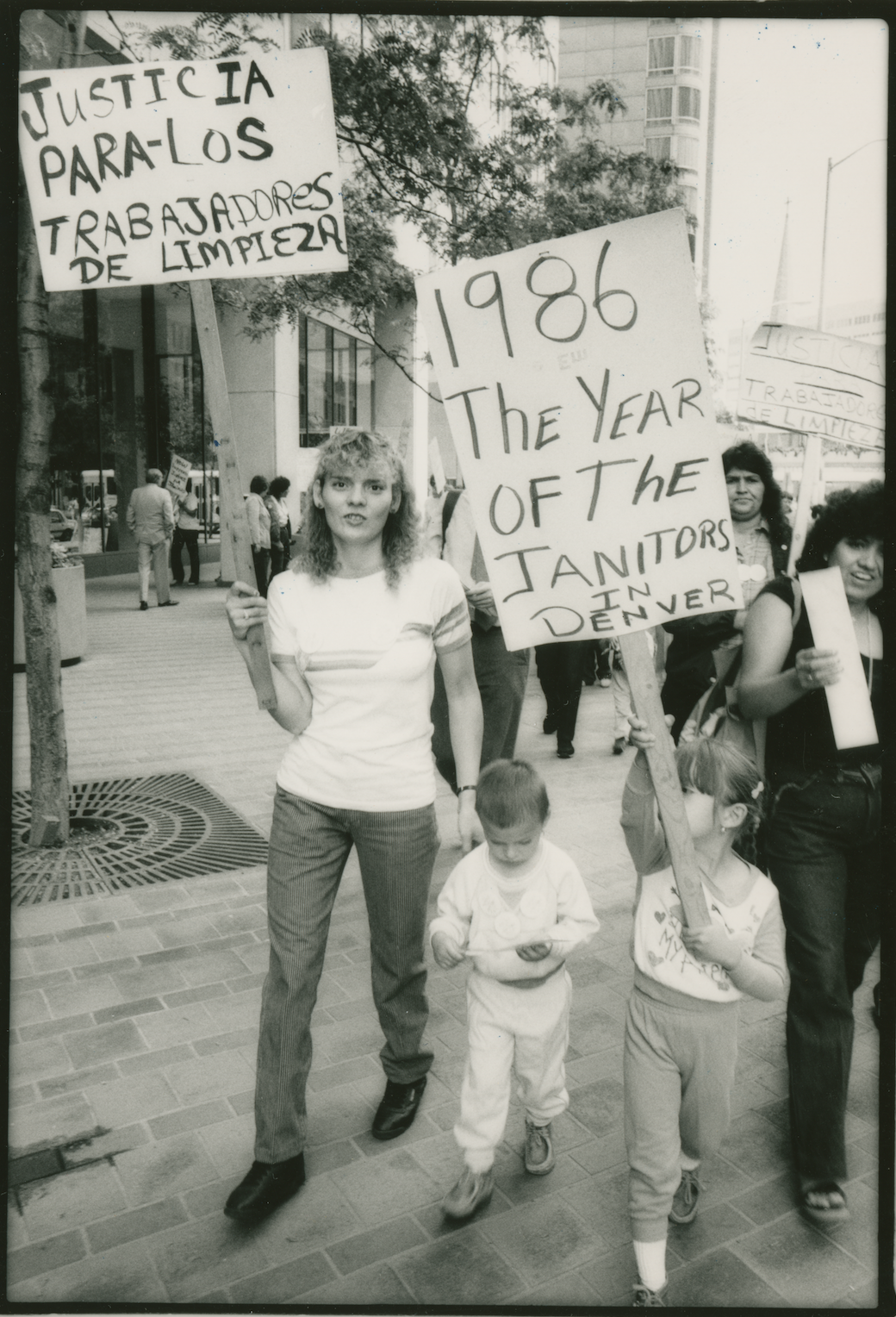 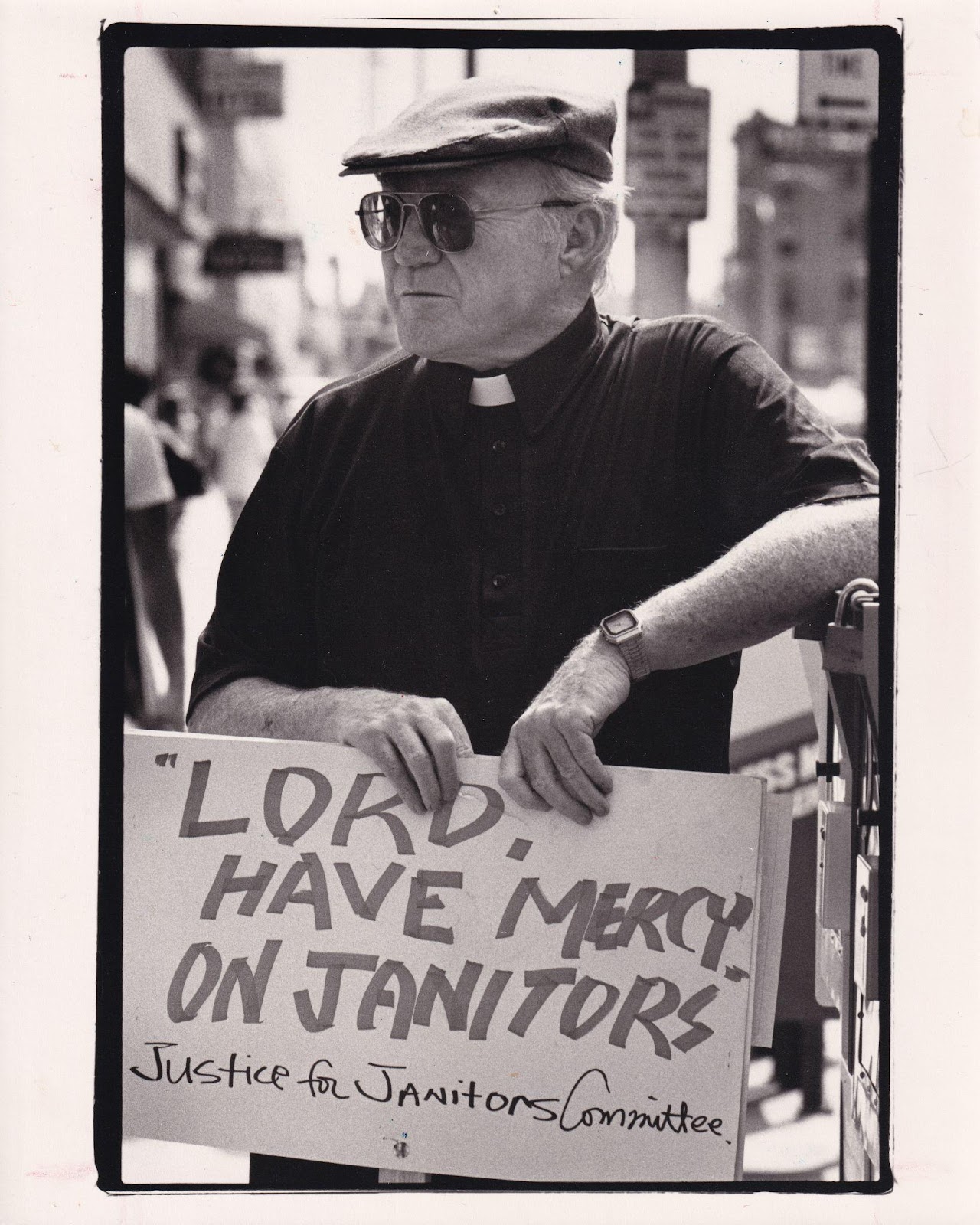 Washington D.C. janitors began organizing for better wages and healthcare in 1987 under the banner of the #JusticeForJanitors movement. Over the course of ten years of organizing and intense public action, janitors came together to protest outside of buildings that exploited non-union custodians. The struggle heated up as cleaners held direct actions -- sit-ins blocking traffic -- to show that the city cannot run without janitors who keep it clean and safe. After a tough battle, the custodians won a big new contract that increased wages, provided fair benefits, and brought thousands of workers into the union. 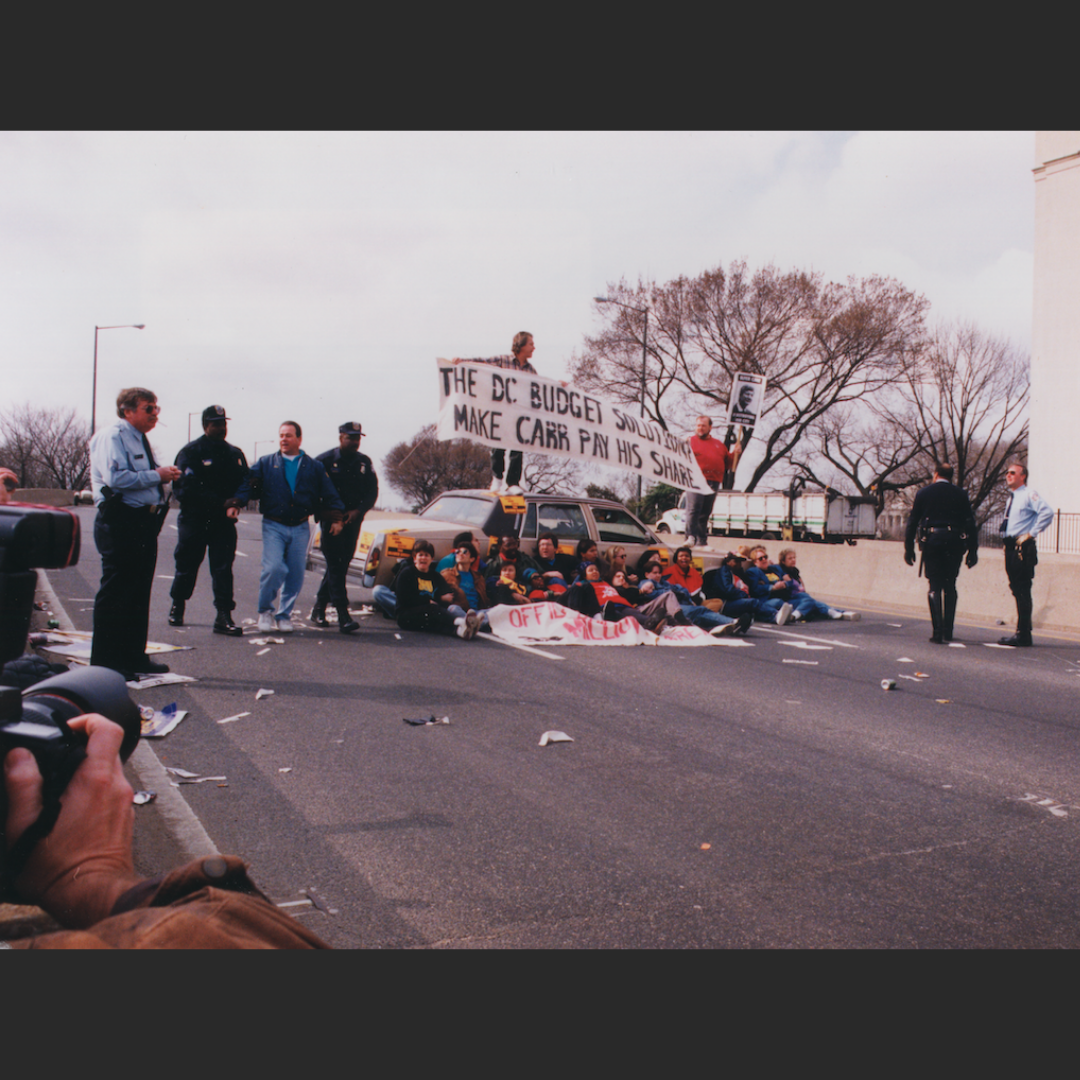 1990 - Los Angeles: Janitors and the Infamous Battle of Century City

On June 15, 1990, Los Angeles striking janitors launched a peaceful protest to win much-needed workplace improvements. The Janitors—predominantly underpaid immigrant women & men—were up against a powerful business community & multinational corporations. On that day, cleaners, their families and supporters marched through the high-rise buildings of Century City, where they were met with aggressive force at the hands of the Los Angeles Police Department. News cameras captured baton-wielding police officers striking custodians—including men and women lying face-down on the ground. Janitors were injured. Some very badly. More than 60 would end up in hospital rooms. Two of the hospitalized were pregnant women – one who would miscarry. This event lit another spark in the #JusticeForJanitors movement which spread across the country. Since 1990, more than 150,000 Janitors have won their union and their determination inspired the film Bread and Roses.

In the 1990s, SEIU6 janitors in Seattle stood together and won employer-paid-family-healthcare – which included a dental plan and 26 weeks short term disability. This victory was historic and was felt across the nation. Today, union janitors across King County all have access to employer-paid family healthcare. SEIU6 cleaners fought persistently through street actions, demonstrations, and through channeling their political power. 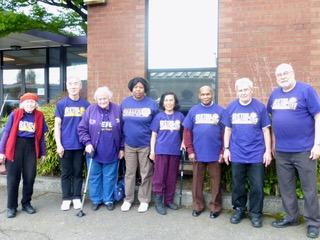 In 2005, the largest cleaning companies in Houston paid their janitors an as little as $5.25 an hour and did not provide any health benefits. Janitors like Ercilia Sandoval fought on a daily basis through actions & demonstrations - including going on strike - and WON better wages, more hours on the schedule, paid holidays, paid vacation time, and health insurance. The campaign started with Houston janitors but garnered support from around the world! 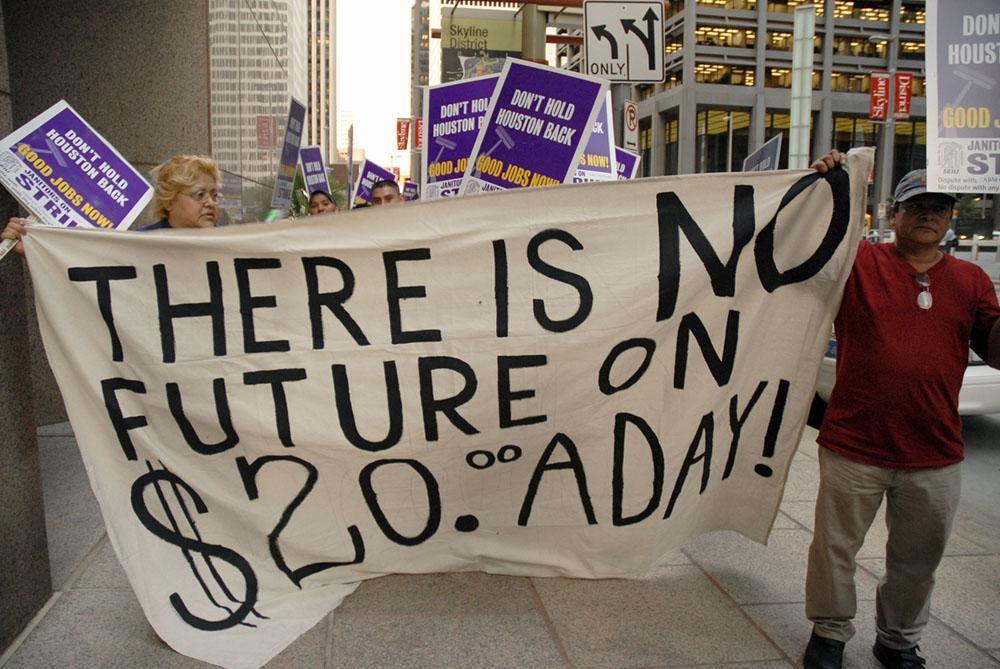 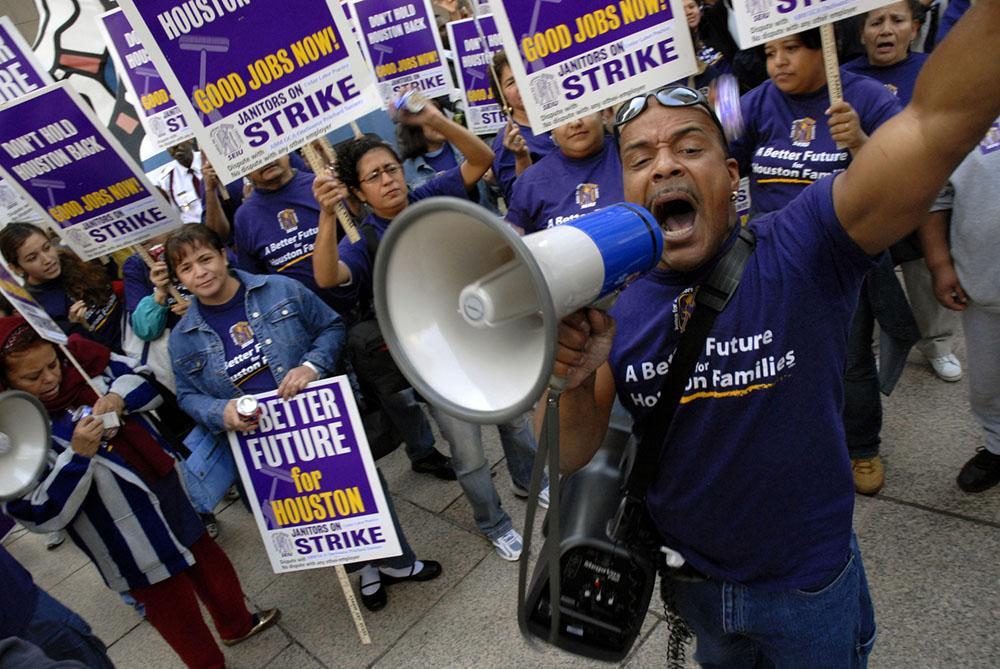 2006 - Miami:Janitors at University of Miami Strike and Win Union!

Janitors working at the University of Miami were paid poverty wages, but they knew that uniting together in a union would give them the power they needed to win fair pay and more. These cleaners stood together and went on strike to win union recognition. The strike lasted two months and was supported by students, faculty, clergy, and community members. Cleaners and supporters held campus sit-ins, participated in civil disobedience, and went on a 17-day hunger strike - with some workers ending up needing hospitalization. Through their struggle, over 400 workers won their union and first contract - victory included a 30% pay raise, at least one week of paid vacation, paid personal days, and healthcare coverage! Today, these same workers, founders of Local 32BJ in Florida, have helped more than 1,000 janitorial workers organize as they close their first contract with major janitorial companies throughout South Florida.

Hundreds of non-union janitors held a historic 28-hour-strike to symbolize the meager $28-a-day janitors were paid by the cleaning companies. With this strike, the cleaners WON their union, creating a wave of unionization throughout the city. The victory helped ensure that the majority of office buildings across Portland were cleaned by Local 49 janitors and helped win healthcare for their children. 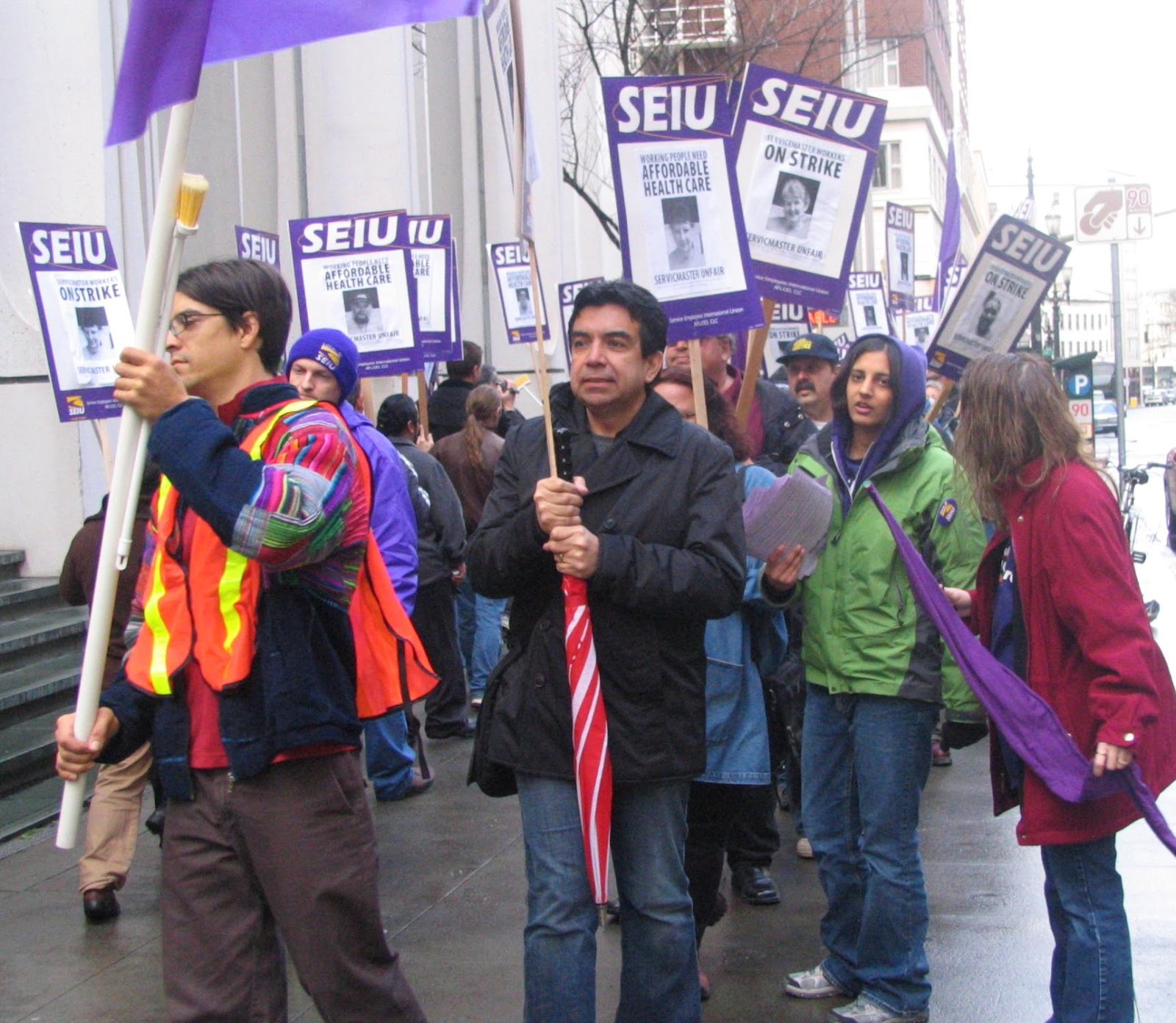 In 2009, SEIU Local 26 began “open bargaining” for the first time. Open bargaining is the practice of allowing all members to be present as the contract is negotiated. During this contract fight, SEIU 26 had a large elected bargaining committee of over 80 workers. Members voted to strike for the first time, and after 26 hours of bargaining overnight before the deadline - janitors won a new union contract with improved healthcare benefits, a stronger definition of full time at 40 hours, green cleaning rules, and new language protecting immigrant workers! 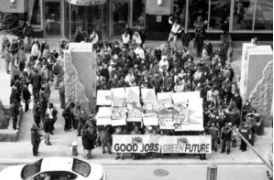 2011 - Philadelphia:  Janitors Across East Coast Converge in Philadelphia to Rally for Union Contract

Amid contract negotiations for over 2,600 building cleaners in Philadelphia, thousands of property service workers from across the east coast – Philadelphia, New York, New Jersey, D.C., Connecticut, and Delaware – rallied downtown to call for a fair union contract. The plight of the cleaners, mostly African American and immigrant men and women, has come to represent the struggle to make a dent in the city’s persistently high poverty rate. Workers brought the full strength of 32BJ's solidarity by bringing members from all districts together. Since this historic moment, 32BJ members have gathered in Philadelphia every four years for the Commercial Contract Campaign.

2016 - California: Janitors Fight to End Rape on the Night Shift

In 2015, the PBS Frontline documentary Rape on the Night Shift was released, exposing widespread sexual harassment and rape of nightshift janitors in Los Angeles office buildings. To help address this, the union began showing the film and creating a safe space for janitors to talk about their experiences. It soon became clear that members of the union had experienced violence on the job.

The janitors decided that, as part of their 2016, state-wide contract campaign, they would fight for ground-breaking legislation that would protect all janitors from sexual harassment and sexual violence. With the help of California Assembly Member Lorena Gonzalez, janitors fought for and passed AB 1978, which requires that all janitorial contractors register with the State and that all janitors and supervisors get annual training to prevent sexual harassment and sexual violence.

Passage of the bill was achieved when a number of brave janitors who were victims of sexual harassment and sexual violence held a fast on the grounds of the State House to honor victims and show the Governor they were determined to see these important protections signed into law. The women, who dubbed themselves the “Promotoras,” have gone on to found the Ya Basta Center which trains and counsels fellow janitors.

500 retail cleaners throughout Minneapolis made history when they won their first market-wide master contract! 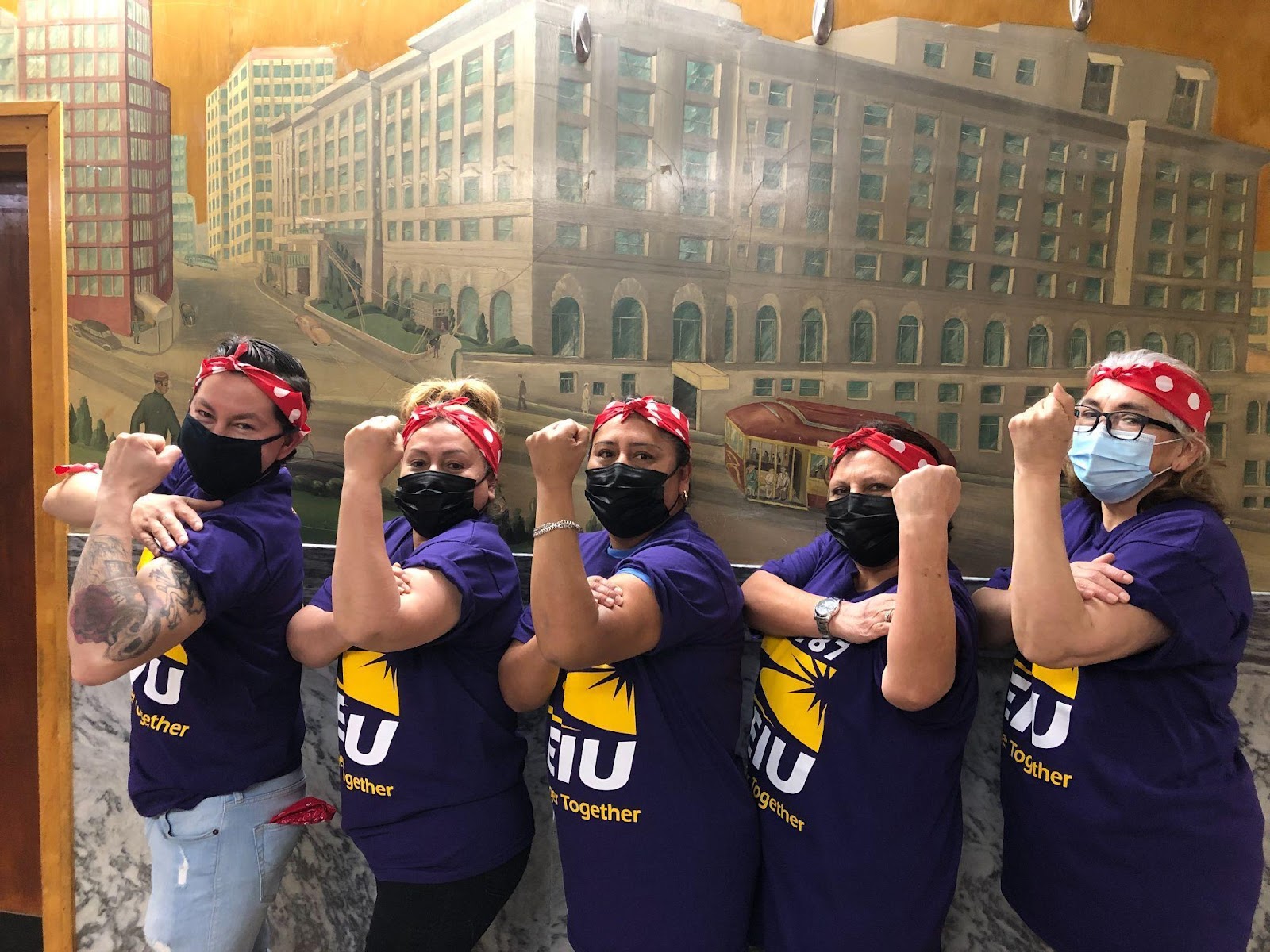 The essential Janitors who clean Denver International Airport kicked off Striketober with an October 1st one-day strike for better working conditions. On November 20th, less than twelve hours after they walked off the job a second time, they won a tentative agreement. This historic agreement includes a $4 per hour pay increase – which is a 23% raise over the life of the contract, workload protections, and increased paid time off. This has been a months-long process, with Janitors holding actions and calling on Denver City Council and the airport to address working conditions. Essential janitors are on the front-line of the COVID-19 crisis, risking their health and the health of their families to keep transportation centers safe for everyone. 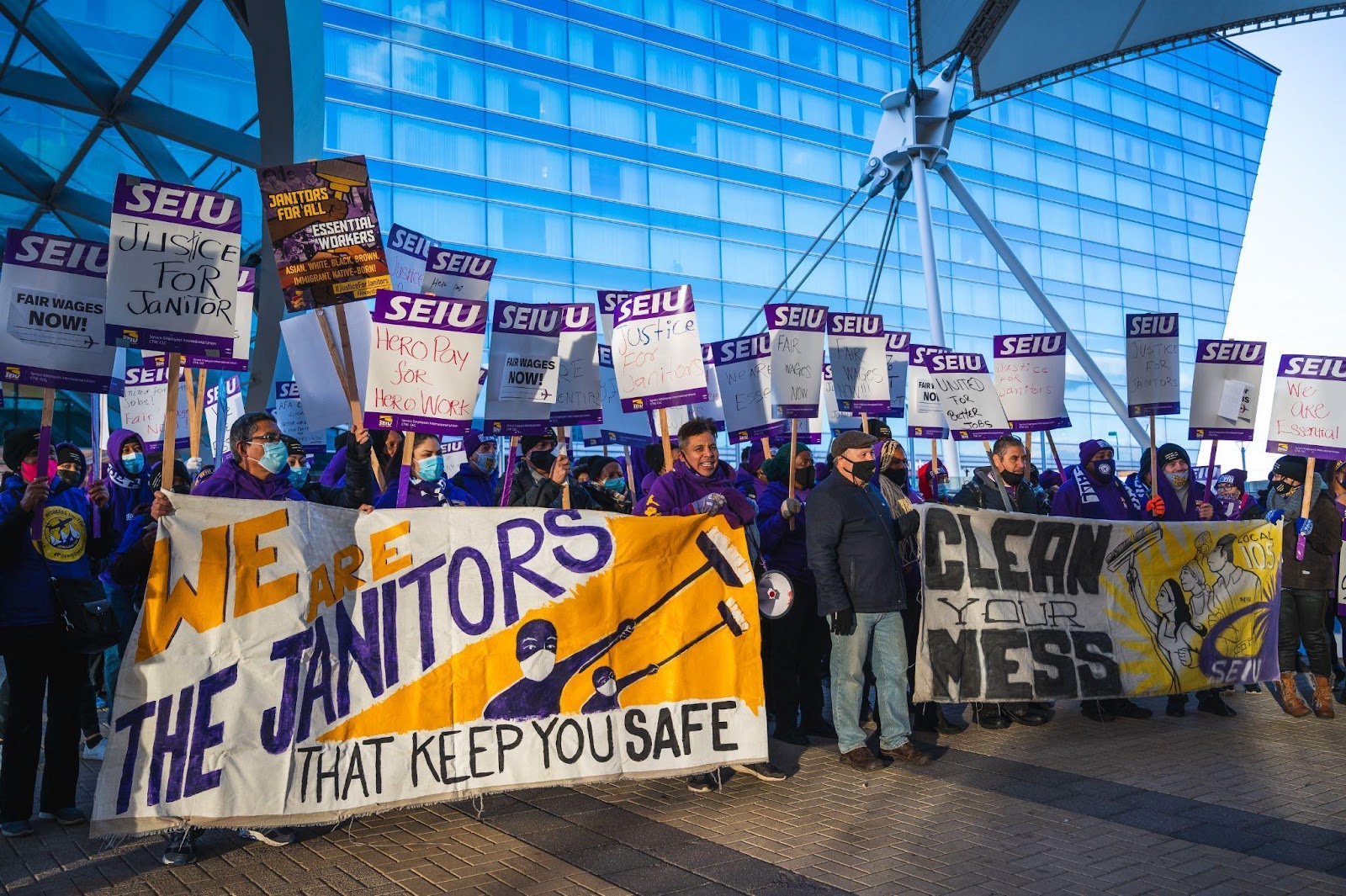